Along with Sunday School, the Music Ministry of First Congregational Church has always been a cornerstone of the parish.  Last week we got a glimpse of the early history of our Church School.  This week, again from the 100 Year Anniversary of FCC, we get a look at the music ministry of our church as it appeared and evolved during the early part of the last century.  It is important to remember that this was all taking place in the previous church building that was destroyed by fire in 1967.

“The organ was installed in 1870.  It was them pumped by hand, and an interesting list of ‘Pumpers’ appeared in the church Messenger, November 9, 1940.  The instrument was electrified, and this modernized organ was dedicated on October 6, 1912.  It had a ‘New detached console, 2 manuels, 21 speaking stops, and 1200 pipes with 8 couplers’.  There were also ‘Richly gilded pipes facing the congregation’.  There were also three upright pianos and two reed organs in use.

Through the years, our choirs, though varying in size, have always been an example of high loyalty and devotion.  For many years before they came into being, however, and contemporary with them, our Church music was supplied by a paid quartet, the number of different soloists being too numerous and too sketchily recorded to list here.  We discover that the first Carol Choir was formed in 1922.  In 1924, an all-girl choir called The Cecilian Choir, whose mother was Mrs. Richard Bennett, was formed and sang at special services up to 1930.  In 1933, the paid quartet was dispensed with, and a volunteer choir, such as we now have, began supplying our musical background for the Sunday services.

Those children appearing in the picture here represent the different departments of the Church School, constituting the present Junior Choir.”

See you in church, 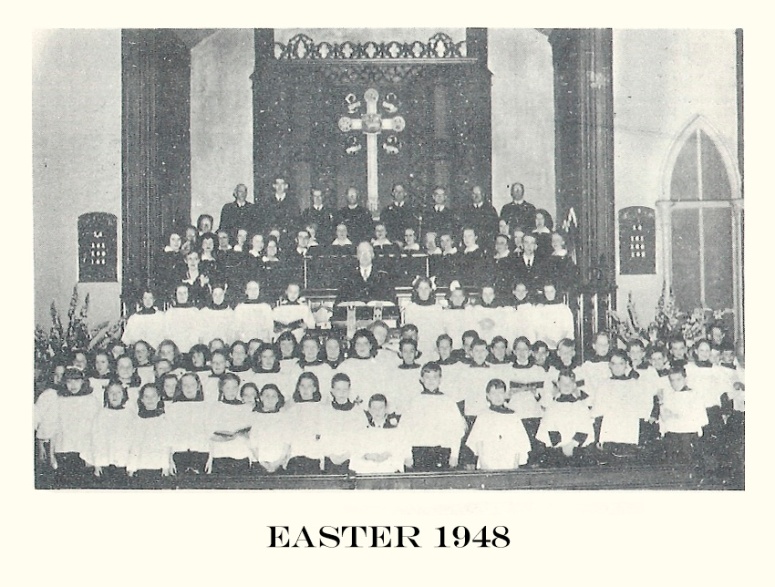